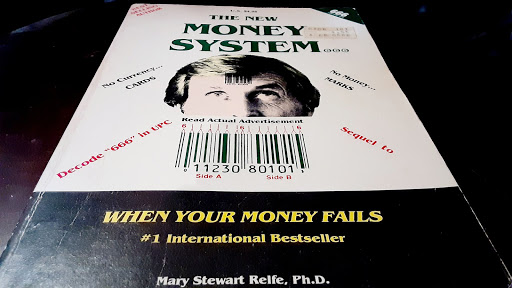 It was the mid-1980s when I picked up a copy of a book by Mary Stewart Relfe, Ph.D. titled “The New Money System: 666” which set about explaining how the newly implemented UPC barcode system was actually a cleverly hidden numerical system that — once decoded — contained the very thing John the Revelator had been warning humanity to avoid for almost two millennia: The Mark of the Beast.

I’m no stupe, so I read this book with a wary eye. After all, I’d already been through Hal Lindsey’s “Late Great Planet Earth” end-of-the-world claims and so far … bupkis.

But Relfe’s arguments actually made sense. Mind, you do have to ignore a lot of the advertising clippings and other anecdotal examples she includes in the book that she seems to think point to the Anti-Christ or the Mark of the Beast. But she does lay out a good case that the UPC code contains a “hidden 666” in it.

On most UPC codes on products you buy (You can go get a canned food product or anything else you wish to check me out on this.) there is the long set of lines of varying widths with numbers beneath them. Those numbers actually correspond to the lines above them. (That’s why when something doesn’t scan, a cashier has to type those numbers in manually.)

Relfe decoded all those numbers from both sides and figured out which sets of lines were which numbers. You can check her chart against any UPC code on any product in your house and she’s got it right.

But here’s the kicker: Those start and stop codes? They’re not just their own code — they also are the same code for one of the numbers on the second side. Can you guess which one? Yep: Six.

So this is all pretty intriguing in nineteen-eighty-whatever I’m reading this. I mean, the Mark of the Beast in the book of Revelation is all about not being able to buy or sell unless you have it on your hand or forehead, and now here it is on everything you want to buy. I mean, sure, you can put a barcode on something, to make it easier to track and to do transactions — but why must you include a 666 on it? Those start and stop codes could have been just another number — or just bars that were no number at all.

So, there’s that. It’s all very spooky and scary sounding. But if I’ve told this to people in all the years since you know what happens? Their eyes glaze over. Or they think I’m a conspiracy theorist.

Admittedly, if you read the rest of Relfe’s book — and she wrote some of others I’ve never read — a lot of her stuff sounds a bit out there. And she makes some predictions that as of 2020 have not come true. She seemed in 1982 when she penned this tome — she refers to herself as a prophet of God, by the way — to believe a worldwide “transaction card” was immanent and would be replacing cash.

I still use cash. 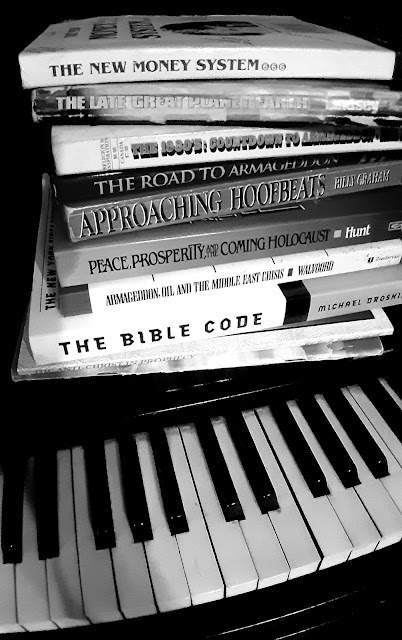 So all that to say that just because something makes very good sense to you and even lines up with your biblical worldview, it might not always pan out.

Mary Stewart Relfe died in 2011, so we can’t ask her what she thinks about the current theories that keep landing in my personal messages. She wrote books about the Y2K and the 9/11 attacks, so she might well have been passing these theories right along to her Facebook friends even though her prophecies from the 1980s have yet to pan out.

One theory is that Microsoft founder Bill Gates created the pandemic so that he could then supply the cure and then secretly implant a microchip when people get the vaccine.

All it takes is a common-sense examination to see that this makes little sense. Gates has a net worth of $114 billion and has set up a foundation to give much of it away. What is is goal here?

But let’s say, for sake of argument he does have some world-domination goal and is, in fact, the False Prophet or the Anti-Christ depicted in the Bible. For a person with such means and ability — he runs a giant tech company — why would he need to invent a new virus, then invent a cure, to hide his microchip inside. That’s horribly inefficient — and time consuming.

A smart guy like that would have taken an already existing virus — the flu — which lots of people already get vaccinated for anyway, and snuck his microchip in that. Not to mention all the childhood vaccinations your kids have to get.

You think you’ve nabbed Ol’ Bill before he could shoot you up with his COVID shot? If he wanted to get you, he would’ve already done it.

The Bible doesn’t indicate anyone will take the Mark of the Beast by deception, but willingly. So there’s little to fear someone is going to sneak it inside your body. Dr. Relfe didn’t even think that.

Look, if you don’t want to get a coronavirus vaccine, by all means, do as you please. But if you are avoiding it because you think you’re thwarting the Mark of the Beast you’re probably just deceiving yourself, possibly to your own detriment.

Yes, Mary Stuart Relfe did sort of find a “666” in the UPC code, but nobody to date has made us put it on our hands or foreheads. If they do, that’s the point at which I’ll say no. And unless you are going to stop buying everything that has a UPC code on it, you’re already headed to hell in a shopping basket. Keeping your sleeve rolled down when they start with the shots ain’t gonna save you.

If you’ve seen this or any of the other theories going around social media that sound outrageous, don’t pass them on just because they sound like the could be true or because the person who sent it to you is someone you trust. Check it out for yourself.

Be like those in Berea who listened to the message of the Apostle Paul and Silas and double-checked it against the scriptures to see if the message was accurate.

Donald Trump has done a lot of things in his historic run for the presidency. One that truly caught my friend Phil Durt by surprise was what he believes is a dividing of the "sheep and the goats."

People are ending friendships over Trump -- real ones, not just on Facebook or on Capitol Hill -- and Christians have been split as well. Some, like Southern Baptist leader Russell Moore find Trump anathema to Christianity. But lots of others, including broadcaster James Dobson, may not necessarily like Trump, but feel he will at least keep the ship from sinking as quickly as Hillary Clinton.

Of course, those are the theologically conservative Christians. Many on the theological left are quite happy with Clinton and are universally opposed to Trump.

But the fight is getting most everyone to show their true colors, he said, making it a lot easier discern which really belong in the sheep pen.

Could God have raised up Donald Trump for such a purpose at this time? Phil thinks it's possible.

"For the scripture saith unto Pharaoh, Even for this same purpose have I raised thee up, that I might shew my power in thee, and that my name might be declared throughout all the earth,"  Paul writes in Romans 9:17.

Owen Tew is the pen name for Greg Richter, a freelance writer whose work regularly appears on Newsmax. He also has had his work posted on, The Clyde Fitch Report, The Huffington Post and The Hill. Follow him on Twitter at @owentew.
Posted by Owen Tew at 10:27 AM No comments:

Advice to a Democratic Voter Wanting to Vote Republican

A friend of mine who is a Democrat recently said he would not vote for any of the Republican candidates in a general election. Still, he is considering voting in Alabama's GOP primary on Tuesday, and was wondering who he should vote for.
Here's my answer:
Depends on which candidate you least like to see as president, should the eventual outcome be a Republican. The nominee is going to either be Trump, Rubio or Cruz. If your goal is to do all you can to stop Trump, I'd say vote for either Rubio or Cruz so they could get closer to stopping him. Alabama this year is awarding GOP delegates as winner-take-all by congressional delegation, so you should probably vote for who has best chance in your area. I don't remember where you live exactly, but OTM or Shelby County would probably be Rubio. Anywhere else in Central Alabama is probably Cruz. Now, if you most want to stop Cruz -- or Rubio -- then vote for Trump. But if you want to vote for the least conservative candidate, vote Kasich. Kasich won't win any delegates in Alabama, but if you just are making a statement of which is closest to your thinking, that's who I'd advise.
Of course, not everyone is in a state like Alabama. Some do winner-take-all statewide, and some proportion the votes statewide. If you're in winner-take-all, just apply the advice I give above statewide instead of by your district. If proportional, vote for whomever you like best out of Trump, Rubio and Cruz.

This is a tweak of the advice I gave Republicans in Iowa ahead of the caucuses, which you can read at The Clyde Fitch Report.
Posted by Owen Tew at 10:16 AM No comments: